What is Early Spay and Neuter (ES&N)?

Neutering is the removal of certain parts of the male reproductive organs, in this case, the testicles.

Female dogs are spayed. There are two types of surgeries to accomplish this; The first method is to do an ovario-hysterectomy.  This operation removes the two ovaries, the uterine horns and the body of the uterus.  The alternative or second method is ovariectomy spay.  In this operation, the uterus remain while the ovaries are removed.  The latter operations is the one we choose here at Ashford Manor Labradoodles because it allows the uterus to remain.

Early Spay and Neuter (ESN) was one of those controversial issues.  Veterinarians were once taught that a dog must not be spayed or neutered until it was at least 2 years of age and then decreased over the years to 6 months of age. They also recommended that a female dog should go through their first heat cycle before being spayed.  One of the main reasons for this teaching was due in part to the anesthetics in use at that time, which were unsafe for the animal.

The reason why this is no longer a controversial issue is because many veterinarians no longer use these older types of anesthesia.  For example, our Our veterinarian uses anesthesia that has been proven to be very safe for young puppies. In fact, anesthetics of this new type greatly reduce many of the risks associated with the older types of anesthesia.  To further increase the success of these surgeries, our veterinarian also includes other safe practices, such as; constant and continue after-surgery care, warming recovery beds, and even better placement of stitches internally.

The first risk, also stated above, is that the anesthesia is not safe for puppies.  We hear this most often.  Of course, that has been debunked with the introduction of newer and safer anesthetics.

Another risk that we come across is that canines who have been spayed or neutered at an early age can have higher rates of cancer.  While this may be true in some breeds, the Australian Labradoodle is not one of those breed.  Australian Labradoodles actually have a very low risk of cancer.  It is also very important to recognize that cancer can be caused by many factors not limited to external factors, genes, inbreeding, and so much more.  Finally, if time is taken to look into the few studies that have been done in this area, it should be noted that many of the dogs tested do have extensive health testing performed. In fact, there are hardly any records of their lineage. Many of these dogs have come from places that do not know or keep family genealogy. 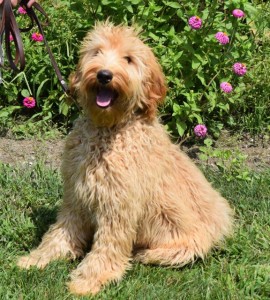 Yet another risk topic that is sometimes mentioned relates to hip dysplasia; an abnormal formation of the hip socket that, in its more severe form, can eventually cause crippling lameness and painful arthritis of the joints. It is a genetic (polygenic) trait that is affected by environmental factors. (see Wikipedia for more information).

Because genetics and environmental factors play a role, much of the problems associated with hip dysplasia is aggervated when puppies are allowed to do things before their structural skeletal system is completely formed. For example, playing frisbee, going up and down stairs, being involved in agility work. These are all things that can affect hip dysplasia.  This is one of the reasons we strongly recommend that puppies should never do these things prior to their first birthday.  In fact, doing so invalidates our genetic guarantee.

The greatest issue we have with these studies against ES&N is that no information is given regarding the current state of health of the dogs in the study, the parentage of those dogs, and their medical histories.  For this reason, our own experience, and even more, the experiences of other breeders of Australian Labradoodles and all our veterinarians seem to present a much clearer and truer picture of the safety and benefits of ES&N.

With ES&N, puppies are safely able to go home only a short few hours after the surgery.  They also recover very quickly because the modern methods used in these surgeries are minimally invasive. The incisions are so small and need only one or two stitches, so they are very quick to heal. There is no need for a week of medications for pain, nor a collar to keep the puppies from biting at stitches (as they are made internally and then the skin is medically glued together). Puppies are ready for supper by that evening and may even begin to run and play by day’s end.  Even still, we control their activities for several days and keep a close watch over them.

Breeders and veterinarians have noticed some benefits that may be related to ES&N, such as a decrease in uterine infections and breast cancer. Also, early neutering seems to eliminate marking in males and some of the other negative behaviors.  Also, while the Australian Labradoodle is certainly not an aggressive breed, ES&N also seems to decrease biting as they mature.

The American Veterinary Medical Association supports ES&N and recognizes it is a benefit.  Animal rescue organizations have also recommended and been involved in ES&N with both puppies and kittens for years with great success.  Finally, Australian Labradoodle breeders have been involved in de-sexing puppies since 1998.

What is our stance?

We connect with Australian Labradoodle breeders all over the country who practice ES&N and their story runs parallel with our experience, which is that ES&N brings many benefits for both the dog and their family.  We believe that ES&N is safe and medically sound and our experience shows this to be true.  Plus, we also believe that the benefits present strong evidence against the controversy that simply has weak arguments.

We look out for the best interest of the breed and your companion!