One of my children was working on their 4-H project the other day and it was reading your dogs body language. Fortunately, our kids have never encountered an angry dog, so we talked a bit about feelings of dogs and their body language.

This past weekend I was visiting an old neighbor who is fostering a dog and she was telling me that he has some severe issues. One is that anything that moves the dog wants to attack. A neighbor was running down the street and this dog attacked her and bit her leg. The neighbor was not hurt, but it certainly scared her!

I found this article on body language, and I thought it was a great resource.  It is important that all dog owners are aware of their dogs body language, this helps you to understand what your dog is feeling and keep your dog healthy.

It is truly amazing to see that all dogs from all over the world has learned to communicate with each other using a universal dog body language. Whether you are from China, Europe or Mexico, all dogs communicate the same way. They communicate their moods and feelings by giving out signals with their body.

An encounter with a dog can be a lovely experience or a very bad one and is totally depending on how well you interpret dog body language.

In this universal dog body language, postures and movements express mood, rank and intention. These are clearly understood by other dogs but they can be confusing to humans. For example, a dog that is wagging his tail does not necessarily mean that he is friendly. It could mean that he is afraid and hope that you don’t hurt him or it could mean that he is getting ready to confront you and might lunge and bite you if you get too close.

To know what a dog is trying to communicate, you will have to look at the overall dog body language. He will be giving multiple messages through his facial expression, his tail and the way he is standing.

Neutral State: A dog which is in a happy emotional state will be less tense than when he is in an alert or aggressive state. His tail is relaxed and wagging; his mouth is slightly open, which might look like a smile to us. His breathing is slightly energetic depending on how happy he is. The facial muscles and the ears are relaxed. If he is very excited he may jump, bow, growl or bark. But the playful growls and barks are given at a much higher pitch than the ones indicating aggression. 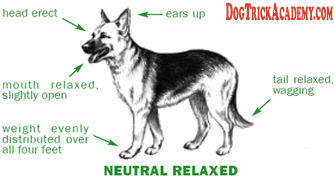 This is a neutral stance dog position.

Submissive: In the universal dog body language, when a dog is frightened, he will try to make himself look as small as possible. They will draw back from anything confronting them, and they may even crouch on the floor. They will avoid any direct eye contact. In general, the tail is down or between the legs; they may lick their lips or nose in a nervous manner. As an extreme they might even roll onto their side or on their back to show their belly or even urinate.

Aroused: An alert dog will have tense muscles, ears will be forward and the face will have wrinkles. His tail may be out straight and wagging slowly from side to side. It’s very important to understand that a dog may become aggressive quickly, or he might just be wondering who is approaching or what that weird noise was. Either way, it’s very important to approach an alert dog with caution.

Defensive Aggression: When a dog is in a situation where he believes he might be in danger, he has two options; he can either fight or flee. When a frightened dog is approached by another dog, his natural instinct is to run away. But if he is on a leash, he isn’t able to run away and he becomes more fearful, and it usually results in the dog attacking the approaching dog. To the untrained eye, this might look like the dog is very aggressive towards other dogs, but he is actually afraid of the other dog and wasn’t able to back away. We call this fear-aggressive.

Aggressive Attack: On the other hand, the aggressive dog is much more likely to exhibit the fight instinct. Aggressive dogs will do everything to make themselves look bigger. They lean forward on their toes, they bare their teeth and their body and face stiffen, exhibiting very deep facial wrinkles. The ears move forward and the tail wags stiffly and slowly from side to side. And they stare directly at the threat.

Overall, it is important to learn to understand dog body language so that you can respond accordingly to every situation.

If your dog is being submissive, then get him to change what he is feeling by going for a walk or doing something to boost his confidence. If your dog is emitting strong defensive aggression then you need to warn others that are in the same environment of what is happening. Just doing that alone can prevent a dog from biting someone.

Here at Ashford Manor Labradoodles, we take pride in raising happy socialized puppies. We prepare your puppy with many different socializing activities. Socializing involves things such as: being on different surfaces, hearing different sounds, playing with different toys, and meeting different people.